Should I Choose Conventional Analogue or IP CCTV? 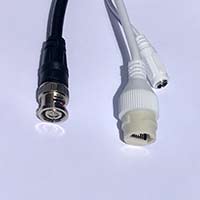 When first deciding on buying a CCTV system for your home or business there are many factors to be considered. One of those factors is the toss up between buying an analogue system and an IP CCTV system.

If you have an existing computer network with accessible network ports then choosing an IP system will negate the need for new cabling. If you are a home owner or small business without a cabled computer network then choosing an "analogue" system may be more cost effective. However an IP system can be installed in a home if keeping cabling to a minimum is a requirement, you need enhanced features like more accurate detection or if you have the need for a camera that is away from the main property. Providing there is power available at the remote location then there are products available to allow connection to remote IP CCTV cameras negating the need for extra cabling.

What is Analogue CCTV?

When we refer to “analogue CCTV”, it is not really analogue in the traditional sense anymore and is being gradually phased out in favor of newer technologies like IP. Standard "analogue" CCTV cameras with 620 or 700 lines are old technology now despite still being implemented in some camera models referred to as "4 in 1" which offer switching between video types (mostly for the sake of backward compatibility), along with covert cameras and is still supported by some models of DVR. CVBS is gradually being replaced by TVI, CVI, SDI, and AHD.

What is considered “conventional” or "standard" by today’s technology would be an HD camera. The emergence of HD-TVI and the like have allowed the convenience of HD video signals to be transmitted over traditional coaxial cabling allowing for a standard setup of a camera, a DVR with traditional BNC connections and regular cabling without the need for a network switch (unless the DVR is connected to the internet for streaming) which is usually needed with IP cameras.

Unfortunately this technology is not usually interchangeable like the older standard of CVBS video, so if you use a TVI DVR then you will likely need a TVI camera (with exception to some model DVR’s like the Dahua Penta-brid range that records video from HDCVI, TVI, AHD, CVBS, and IP) unlike IP cameras that very often use the video codec called ONVIF which aims to standardise the way video surveillance systems communicate and increase inter-compatibility.

“Conventional” seems to be getting more interesting now. The TVI and CVI solution has the ability to be a very cost-effective way of installing CCTV especially if you already have coaxial cabling in place from an older system.

What About IP CCTV?

There are exceptions to compatibility with IP. Some manufacturers are still using their own codecs but most reputable manufacturers have since moved to ONVIF, opening up more opportunities to mix and match equipment and provide a more future proof solution.

Very often it would be a more pragmatic approach to install IP CCTV. There are many reasons for this. IP cameras maybe be slightly more expensive but if no cabling is in place and you already have structured cabling or a network in place it is often very easy to deploy CCTV using your existing network. Also, some more advanced features are often included with IP cameras.

Features like face recognition are usually only supported in premium IP ranges although in theory the DVR could take any good quality video signal and apply analytics to it. There is also the option of recording these cameras to a server that is already on site although constantly writing to a hard disk that is not designed for 24-hour streaming video is not recommended. Special HDD’s are needed for a reliable recording solution, so an NVR, meaning “network video recorder” is recommended and often a lot easier to set up.

Whilst we discuss NVR’S and DVR’s it is also worth noting that most, if not all DVR’s are actually network encoders with recording and themselves can also sit on a network just like IP cameras. By their nature, when the recorder takes a video signal from an HDTVI camera or similar it converts it to a stream which is no different from the signal that comes from an IP camera. Not to muddy the water but this is important to also consider, as the end result is often the same. For example, you may want the cameras streaming to an app on your phone, in which case both TVI and IP solutions can provide this.

It is also worth considering some other camera features that are not available on HD-TVI and CVI cameras like panoramic functionality that uses more than one sensor. Cameras like the Hikvision Panoview have multiple sensors and then the picture is stitched together using a software algorithm, providing you with a panoramic image not compromised by simply being a wide angle lens on one single sensor but multiple sensors making up a total of up to 20 mp. These can also do the job of two or three cameras whilst only using one IP address and one recording channel allowing you to actually pan around a very wide picture both in real time and whilst playing back a recording.

IP cameras can come with very high-resolution sensors, sometimes as high as 20mp on a single sensor which is not available over coax or twisted pair, but care should be taken not to fall into the trap of buying the highest resolution camera you can afford. Other factors like the quality of the optics, build quality chipsets, software, lighting and commissioning all play a part in the overall picture quality. That said an IP solution is probably the best solution if you are looking to future proof, need more features with even higher resolution or if you are looking for a system that can integrate into video management systems, building automation systems and other such software more abundantly.

There is often a crossover of technology between IP and traditional CCTV. For instance, you may have an IP system and utilize some existing coaxial cabling for IP cameras. You could use a technology called EoC which is “Ethernet over Coax”. This does what it says on the tin and can potentially send data over a transparent link up to 2.4 kilometers at a bandwidth of 1 Gigabit. It is even possible to send PoE “Power over Ethernet” over coax too!

Not to mention support for IP cameras often extends to HD over coax systems. An example of this is Hikvision’s TVI or “Turbo HD” DVR’s they support the coaxial connection of cameras on the back of the unit but can also detect and add IP cameras. So the move to IP need not be a drastic one. If you are thinking of upgrading to IP CCTV then you may be able to phase the upgrade process, depending on what DVR you own or purchase.

I Am Thinking About Buying a New System. What Should I Choose?

For the homeowner especially this is more than likely decided by budget. There is no question that HD- TVI and coaxial based cameras are more cost-efficient than IP systems but if you are looking to future proof your system there is a very good case to install IP CCTV which will also allow you to upgrade with various manufacturers in the future.

There should not be any additional costs involved with cabling as the price between CAT5 and RG59 coax is much the same and labor costs would be exactly the same.

For business or a public body the case for installing an IP solution is clear. The added technical benefits and return of investment by way of crime prevention coupled with cross-compatibility make the choice seem more obvious. This may also have the added benefits of IT being able to diagnose some issues that may arise. With IT usually being in charge of the structured cabling in large buildings this can further reduce ongoing service costs.