How to Find Video Faults on HD-TVI and Analogue CCTV 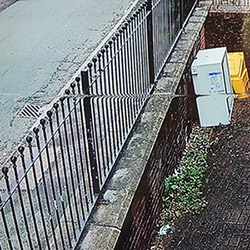 Video interference can be a contentious beast. Recently we took over a system at a local community centre. The job was to upgrade 12 Cameras to Hikvision HD and replace the DVR and Monitor to suite. Everything started out ok and the first few cameras went in without a hitch but we soon noticed some strange artefacts on the video stream.

Whilst installing the 9th camera we found profound distortion on the camera. From there it was pretty obvious where the fault was. Something wasn’t right with that video feed and it wasn’t the camera or the DVR. We also had doubts that the cable was faulty.

Firstly we assumed it was a ground loop issue and tested a humbug on most of the feeds, to no avail. After some extensive searching, we found a PSU in a cupboard. Sure enough metering the PSU proved it wasn’t right, it only read 11.5 VDC. Changing the PSU rectified the issue and the distortion on all the other cameras. This just goes to show how mains interference can impart itself onto the feeds across an entire system and just how difficult it can be to fault find video distortion and artefacts.

We have come across this type of distortion actually more often than the dreaded ground loop barring which can be rectified by simply installing an earth isolation transformer or more commonly referred to as a humbug.

Let Us Take a Deeper Look at Mains Interference 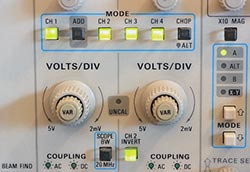 If we were dealing with audio equipment then you would hear this interference as a hum usually oscillating in the frequency of 50-60hz depending on locality. However, since we are talking about video, we are seeing it instead. Both would be visible when analysed with an oscilloscope along with the related harmonics that are produced from the fundamental frequency, although we don't really need to do this to diagnose the problem. Mains hum can also be used forensically to determining where a particular video or audio recording was performed by comparing these harmonics and characteristics of the fundamental since it leaves a kind of fingerprint depending on the source of the recording.

These harmonics can also be to blame for the interference we sometimes see on CCTV systems. We don't really need to know all the science behind it but with an awareness of the issue and the right tools it doesn't have to be something that can cause too much of a problem.

With that in mind its worth remembering four things when a ground loop is ruled out and diagnosing/fixing this type of problem. Firstly "isolate", I don't mean turn off the power I mean to separate the camera from everything else, power wise and end of line, equipment wise. This will help you understand where it is coming from and rule out other power sources and cameras. Secondly, "Power supplies" isolate any mains and change them or swap them with other equipment that is known to work ok. Third, swap camera out to test it is not the camera at fault.

If all this doesn't locate the issue then you may be looking at a fault that is caused by an electromagnetic frequency imparted on to the cable from nearby high voltage cables or power supplies not related to the CCTV. You could run a tempory cable from the camera position to your control equipment to prove and resolve this.

Other types of video faults can include a very black looking picture that is confirmed by testing as not being a fault with the camera. This is very often the result of a poor connection, usually a bad BNC connection but sometimes can be caused by erosion of the coax characterised by blue crumbly braid visible when stripping the outer insulation off. Very often this can go all the way along a cable run and the only solution is to replace the cable. Crushed cables in ducts are also very common. This normally results in a total loss of video or sometimes an intermittent picture, sometimes this can almost seem, weather dependent, as the connection makes and breaks depending on moisture and temperature.

During my time working on large town centre projects I have probably come across what feels like every fault possible but there is always one fault that eludes experience and takes many hours to rectify. I have yet to come across a fault that was not simple in principle once the cause was identified. It always helps to listen to your customer and ask them when the fault started, did it get worse as time went by or did it suddenly appear? All these things can help diagnose what sometimes feels impossible to identify.

How to Deal With Blurry Images 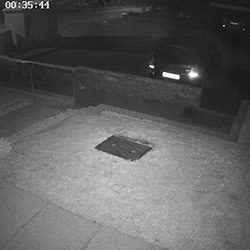 Very often the cameras infrared LED’s can play havoc with the quality of your night images. Modern cameras have been designed to reduce these problems but sometimes you may need to take additional steps. This can include some very simple steps like simply keeping the plastic dome bubble clean!

Some blurring of the image is actually normal for CCTV systems of all types and some planning and awareness of this is needed when setting up or planning a system. If you find yourself asking why your CCTV doesnt capture numberplates or moving objects very well then that may be more to do with the set up or the cameras or the limitations of a particular type of CCTV camera.

If however, you are finding that the camera has a very good picture by day but has blurry artefacts by night and is clean you may need to take additional steps. Firstly make sure that the foam lens surround is in place. The purpose of the foam ring is to avoid the issue by stopping the IR light leaking directly into the lens as opposed to bouncing off what the camera is looking at which is what you want.

There are now many new models of CCTV camera that are designed to tackle the issue with IR blur and reflection. The "turret" style camera tackles this exact issue by getting rid of the glass dome completely. It does this by seperating the lens from the IR LED's.

Secondly the IR light can reflect off nearby surfaces this can happen from any type of surface. UPVC is especially bad for this. You may need to reconsider the position of your CCTV camera but sometimes just a simple tweak of the cameras viewing position will remedy the problem. If the camera has a visor then an adjustment of its position can help stop some reflection. It can also help prevent the iris shutting down when the sun is bright during the day.

There are other common issues that can cause a blurry image which persists during the day but are still more visible at night, like a lens that is not focused correctly. This mostly occurs with cameras that have an adjustable "varifocal" lens, theses type lenses will need adjustment from time to time to keep the image at its optimum. It is worth noting that loss of focus can also happen with a fixed lens camera, especially if the camera has been subject to a drop or heavy impact.

Other signs of impact damage can include the presence of just part of the picture being out of focus. Sometimes after an impact the image sensor can become loose and lose its alignment. As cameras are especially prone to this it is crucial to exercise care when handling CCTV cameras.

Implementing all of the above should remedy all but the most stubborn of issues however if you are still finding issues with your system you can contact us for a site visit and evaluation. We have prices for CCTV installation and fault finding on our CCTV installation prices page. Sometimes artefacts on the video signal could be a fault with the camera. We can verify this and advise the best course of action.